Toby booked us at a motel near LAX tonight before we fly to Lexington tomorrow.  I had to be at an all day training session and so it was decided that Toby would pick me up from work so I wouldn’t have to drive back to Carp and then back down to LAX.

Toby called me in the afternoon telling me that she was having problems using the online check-in procedure for Northwest Airlines.  She said that she was swamped and I agreed to look into getting us checked in.  A little sleuthing turned up the fact that we couldn’t check-in online because we had a fare difference of $460 *per ticket* that must be paid before check-in.  I called Toby and she said that when she had made the flight changes that the reservation agent had assured her that there were no additional charges.  She said, "I’ll take care of it".

20 minutes later she called me back and said that I should now be able to use the online check-in system.  While she was in the process of telling me that she would leave in about 10 minutes to pick me up, she started screaming like crazy.  Really loud.  LIKE REALLY REALLY REALLY LOUD.  After a full minute of screaming, I was finally able to make out "AAAAAAAAAAHHHH THERE IS A MOUSE IN THE SINK AAAAAAAAAAHHHH HE’S TRYING TO JUMP OUT. AAAAAAAAAAHHHH I’ll call you back." Click.

So here I sit, wondering if my wife was eaten by the mouse in the sink.  How come the vermin show up only when she is by herself?

The Merchant of Death (Pendragon Series #1) by D. J. MacHale

2.5 stars – Merchant of Death is the first in the Pendragon series. This was a mostly forgettable novel. The interesting part of the book was that it was told through the main character’s journal writings and his best friend’s actions while reading the journal. Format – Electronic download from LAPL played at fast speed.

Nightlife: A Novel by Thomas Perry

4 stars – Nightlife is another fantastic novel from Thomas Perry. He is one of my favorite authors. This book is suspenseful and thrilling. It started off with a bang (literally) and ended well. Along the way I was on the edge of my seat hanging on every word. The only bummer : I have yet to find Perry’s work as audiobooks. Format – hardcover from Ventura County library. 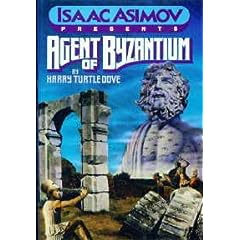 3 stars – Harry Turtledove writes great historical fiction. I have read a number of other books by this author, and while Agent of Byzantium was not my favorite, it was quite enjoyable. The fun thing about historical fiction is that it is fiction. This book’s main character basically makes most of the major discoveries of the middle ages: gunpowder, using cowpox as small pox innoculations, telescopes, etc. Format – hardcover from Ventura County library.

Close to Home: A Novel of Suspense by Peter Robinson

1 star – slow moving, disjointed narative, also had a weird psuedo-pedophilia subplot throughout most of the story. I finished this book thinking that it was just not that great. Format : Audiobook at fast speed (but not fast enough)

0.5 stars – A good book in the vein of Kinsey Milhone or Stephanie Plum up until the final 10-15 minutes. The ending involved incest and was totally unexpected. Unlike the previous book, where I was on my guard that ‘if it got worse, it stops’, I was totally unprepared for the ending. And it makes me mad which is why it gets a lower rating than the above book. Format : Audiobook at fast speed.

0 stars – I didn’t realize this was #13 in a series. The premise is that this woman is a federal marshall, certified vampire executioner and zombie re-animator. It sounded like it could be interesting. It wasn’t. I listened to about 1/2 hour of the protagonist whining and complaining and over-analyzing everything. I couldn’t take it. After I quit the book, I looked it up on Amazon and the first 4 reviews were 1 star (the lowest on Amazon). LAME. Format : Audiobook at fast speed.

1.5 stars / I like historical fiction. I like the idea of embellishing on known facts to create a fuller story. But I like my historical fiction to add to the story, not change it. Some of the issues I had with the plot points were addressed by the author in the afterword, but some were not. THe afterword was also revealing in that the author states that some of the information on Abraham’s early life came from ‘The Pearl of Great Price’ a sacred Mormon text. One thing that really irritated me is that in this novel Abraham was of priestly lineage from Noah through his father Terah. But Terah is clearly identified in the book of Joshua as an idolator. Anyway, this book was written from Sarah’s point of view and thus contained lots of mushy introspection and emotional exploration. I found myself wanting to fast-forward in more than a couple of spots. When I told Toby about this, she lit up and said that she would like to listen. Chicks. Format : Electronic download from LAPL played at fast speed (but not fast enough).

3 stars / Only a couple of books left in ‘The Brotherhood of War’ series. This is book 8, and I intentionally skipped book 7 because I read on Amazon that the series originally ended with book 7 (“The Generals”) and that 8, 9, 10 were written as prequels in the time between book 6 and 7. I don’t know what happened, but some of the characters had been promoted and stuff. It was a little confusing. This book was probably my least favorite so far because the author didn’t focus on the main characters of the series. Format : Tape from Ventura County Library. Current Listening : The Merchant of Death (Pendragon Series #1) by D.J. MacHale Current Reading : Nightlife: A Novel by Thomas Perry

Code to Zero by Ken Follett

2.5 / 5 – This book was told in flash back about the early space program and an amnesiac scientist. Format : Electronic download from Netlibrary played at fast speed.

3.5 / 5 – This is the first book I’ve read by this author, and I intend to search out more. The main character is an Army JAG lawyer sent to Kosovo to investigate a massacre allegedly committed by Army Green Berets. The main character is irreverent and very funny. Format : Electronic download from LAPL played at fast speed.

Between Hell and Texas by Ralph Cotton

3.5 / 5 – Book #2 in the ‘Fastest Gun Alive’ series. This book is the reason that I started doing these book reviews. I had read the first book, Gunman’s Song and knew that there were more that I wanted to read. However, I forgot the title and author, and kept thinking it was Gunslinger something, and so I couldn’t find anymore books by this author. I decided that I wanted to keep track of the books I read so that I could get other books that I liked. Eventually, I just browsed through all the books with g-u-n in the title and got the author. It was worth the effort. This book is an excellent follow up to the first. Format : Electronic download from NetLibrary played at fast speed. Current listening : Sarah: Women of Genesis by Orson Scott Card and Brotherhood of War 07: The New Breed (Brotherhood of War) by W.E.B. Griffin.