After spending most of Saturday working on refrigerator / water issues, Pop had to go do some long planned Valentine’s day stuff with YaYa.  He came back Sunday afternoon to continue to get things ready for Chelsea Nawai’s baby show next Saturday.  The task for Sunday was to get the refrigerator into its built-in alcove.

The big question since the drywallers finished up last September is :  Will the reefer fit into the alcove?  Even before the drywall went up, the area for the reefer had shrunk.  It was measured out at plenty of room for the reefer, and to be on the safe side we had 1/2" drywall (instead of the 5/8" used everywhere else) installed.  But at the end of the day, what should have been 3/4" to spare in the alcove was measuring out at exactly the same width as the reefer.  Not good.  But we were hoping and keeping a positive attitude.

Thinking good thoughts got us nowhere.  The reefer would not fit into the alcove.  Not even a little bit.  The drywall had to come off.  I thought we were done with demolition, but the hammers were swinging like crazy.  Once the drywall was removed, it was obvious where our extra space went.  The bullnosing on the corner bead was not accounted for in our measurements.

The picture below is a bit dark, but if you look closely, you can see the frustration on Pop’s face while we pulled out the drywall. 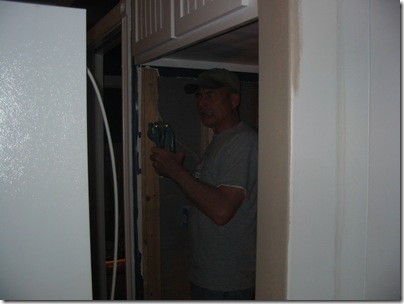