Spending Saturday afternoon at Arroyo Hondo Nature Preserve. We had an archery demonstration and a boomerang clinic. Then we walked down to the beach through a tunnel that was built under the freeway to allow the steel head trout to get upstream.
Near the beach there were 2 geocaches, so some boys and I climbed up to the top of a couple of bridges and the boys threw rocks down while I hunted for the geocaches. I found the first one and before walking the 1000 ft. to the next one, I told the boys not to play on the railroad tracks. I told them that all gravel was off limits. About 90 seconds later, a train came barreling down the tracks. Whew! Since there were no crossings near, the train didn’t blow the whistle, and I didn’t hear it until it was very, very close.
Dinner is tri-tip and hotdogs and stew. Good stuff. 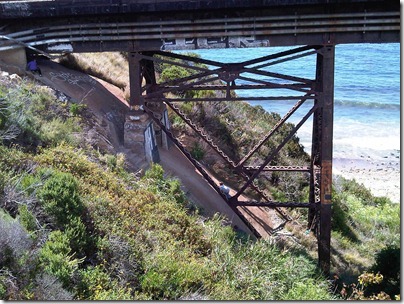 Can you spot the boys in the trestles?

When not at climbing, the boys were swinging 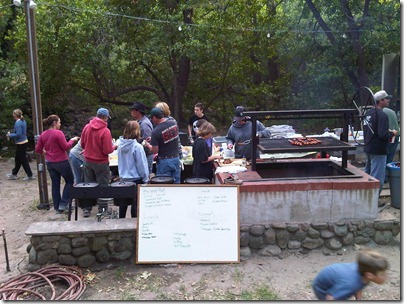 The best part of camping, the food!