Carpinteria — One teen is under arrest and investigators are looking for more suspects involved in a rash of vandalism.

The Santa Barbara Sheriff’s Department is investigating reports of more than 60 vehicles that had their tires slashed over the weekend in various locations, throughout Carpinteria.

Deputies say evidence recovered at the scene led them to 18-year-old Gustavo Julian. Julian was arrested on Sunday and booked into the Santa Barbara County Jail on felony vandalism charges.

The investigation is ongoing and sheriff officials say there will be more arrests.

Anyone with information about these crimes are urged to call the Sheriff’s Department in Carpinteria at 805-684-4561.

At 7:15 a on Sunday, I was washing Lucy and preparing for church when Max came and told me that a sheriff’s deputy wanted to talk to me outside.  When I got downstairs, I got the bad news.  Both street side tires on my Honda Civic had been stabbed in the sidewall.  Ugh.

Although it was a rotten situation, it was resolved in about an easy manner as possible.  AAA dispatched a tow truck right away, and it arrived a few minutes early.  The Firestone Tires in Santa Barbara was able to get the new tires on in the amount of time they told me it would take.  It could have been a lot worse.  The van could have been hit, then I would have had to replace 4 day old tires.

According to my neighbors, the ‘evidence recovered at the scene’ that was referenced in the news article was actually a blood trail that led from one of the cars to the jerk’s house.  He had cut himself and dribbled everywhere. 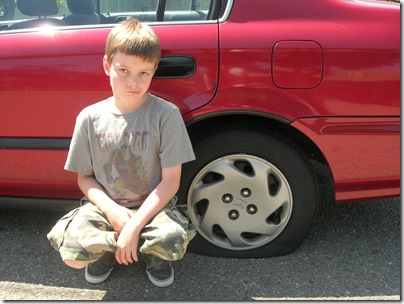 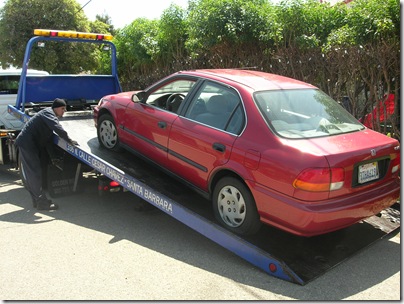